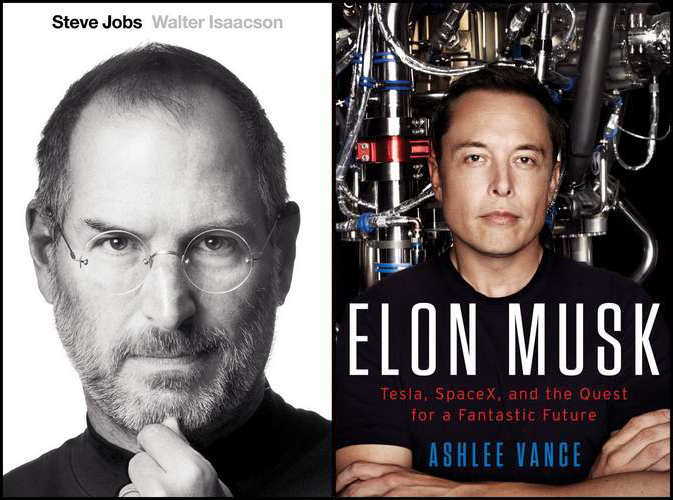 Summer vacations are the perfect time to read (even though I have found that reading in the bus or traffic is a good way to make the most of the time). During my last summer vacations, among other things, I have read two books I would like to recommend you: Steve Jobs by Walter Isaacson and Elon Musk by Ashlee Vance (not the company you would want hem? – well you are not the only ones). Books are biographies about two individuals that I personally consider among the most powerful entrepreneur-innovators in the last decades.

Spoiler Alert – The following text has more serious tone compared to above. Your time is precious, so I suggest you continue reading 😀

The book about Jobs focuses more on the individual and his struggle to give us the services we have today. He had an impact on 6 major industries through two companies: Pixar and Apple. His DNA is rooted in the way Apple operates. The book about Musk focuses on the culture of the company he has built, how it works and how the things are done. You immediately realize that there is a little bit of Musk in everything his companies do.

Their way of building and running the company is a combination of classic model combined with modern elements of Silicon Valley. Jobs is heavily inspired by Bill Hewlett (HP’s founder), while Musk resembles Henry Ford (both have established car companies). Both prefer the direct link to the customer by eliminating distributors and using the vertical market model. In every product, Jobs insisted on continuous improvement of design in order to give the final user maximal experience. He was minimalist and everything wanted to be done with as little action as possible. Musk, on the other side, insists on continuous cost reduction in order to make the final product more affordable for consumers. Jobs paid a lot of attention to marketing (his biopic movie was built around three presentation backstages); Musk many times, completely bypassed PR department (reminds you of Tonny Stark?).

Both Jobs and Musk, among other things, focused on creating entirely new products, undeveloped before for mass use, at a time when all competitors were stuck in place with innovation. In digital economy Jobs is valued as the forerunner of innovation and imagination by revolutionizing music, publishing and application industry. Regarding renewable energy, Musk is on the right path to radically change the automotive industry and to become a forerunner in the exploitation of solar energy.

Job’s motives are based on the importance of people standing at the intersection of human and natural science, meanwhile, Musk’s main purpose in life is to turn humankind into interplanetary species by becoming the colonizer of Mars (that’s the reason why SpaceX exist in the first place). There are two pictures in Musk’s office – the first depicts Mars as it’s currently while the second is how he imagines being colonized (Musk considers the invasion of space as the only way mankind can survive).

At first glance every marketer, every businessman, every investor, every entrepreneur or any crazy person after design, would like Steve Jobs, the rest may easily like Elon Musk. Both are persistent, terribly innovative, often unscrupulous and in a constant fight with their engineers  (Jobs due to excessive mania regarding design, Musk regarding cost reduction). Both figures have their controversies and acceptance in media. Many like only one, some both and a part none of them. The decision is yours.

Grab a book and I assure you that before finishing it, you would have ordered the second one 😉